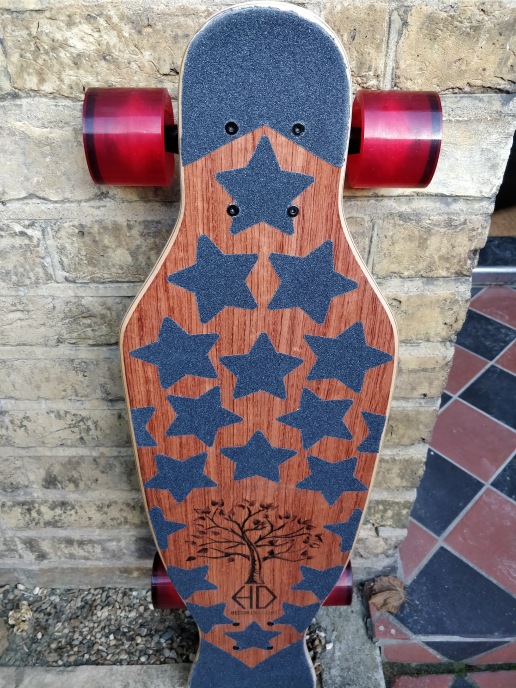 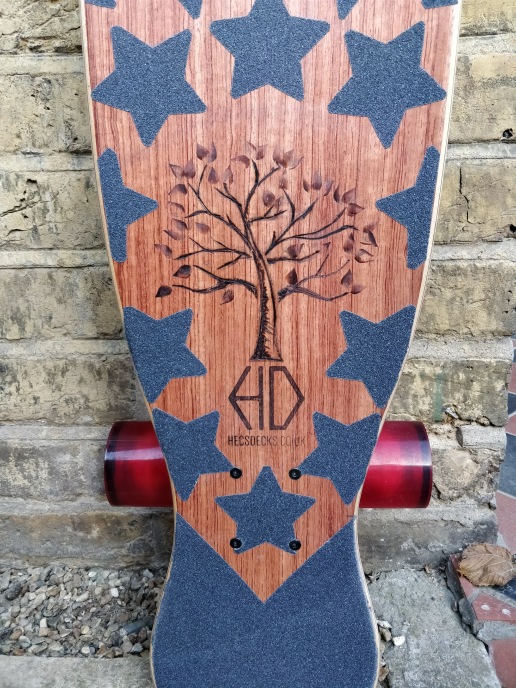 After ripping the (hated) clear grip-tape off the Hec’s Fish, I got up early with an idea and found our Christmas cookie-cutters, including a star-shaped one. I am actually pleased with how it all turned out, given it was an early morning JFDI – plenty of practical grip and it still shows off the wood and my tree design.

The cookie-cutter was not sharp enough to go through cleanly the grip-tape, but it was easy enough to make an indent and then cut the shapes out. The tricky bit is then measuring out lines and putting the shapes in a regular pattern. 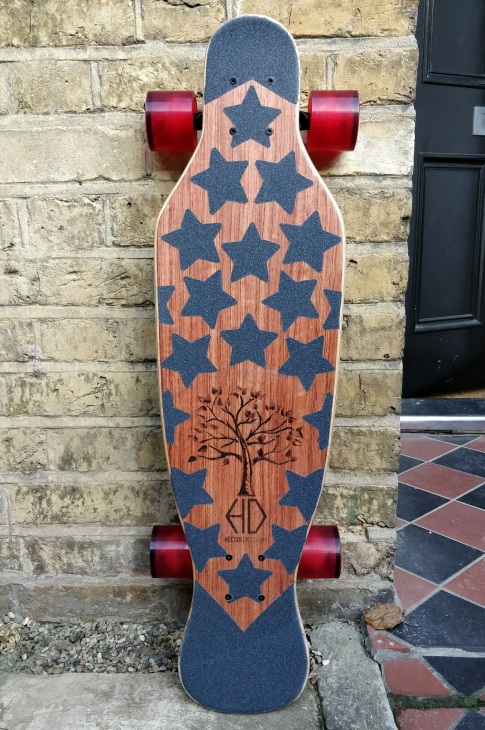 I have had lots of comments and questions regarding Alfie and the grip-tape patterns and cutting.

The first thing is that this was not done first time in one go – I had many many tries and had help from a Loaded replacement grip kit for some of the shapes.

There are 5 Loaded grip-tape kits I know of, which give you some nice individual shapes to play with.

In addition to these are a few pre-cut (laser-cut) patterns from the likes Lokton, however, the longer 40×11″ versions, as opposed to the smaller square 11×11″ ones, seem harder to find.

If you have access to a laser cutter then life is much much easier and they are usually available at community maker/engineering facilities, if not these pre-cut patterns can save a lot of time and heart ache. Although the pre-cut sheets are relatively expensive, I would dread having to do these kinds of patterns with just a ruler and razor-blade.

My relatively inexperienced pattern cutting to date has been much more basic, using only steel rulers and kitchen pots: saucepans and frying pans – sadly there is no community engineering workshop near me, otherwise, I would use a laser cutter every time.

My cutting with a razor-blade, or carpet knife, has had mixed success. Patterns drawn on the paper backing, even with new blades I have found often snags and produces poor ragged edges. Cutting on the top, direct into the grip, has produced much better clean edges, but obviously, it is not easy to draw on the top. The clean curved edges on Alfie were achieved by marking on the back paper of the tape the start and end point of the curve, making a small cut with scissors and then placing the saucepan or frying pan on the start and end points/cuts and cutting around the curve of the pan with the razor-blade.

Finally, grip-tape does not need to be black or gray, there are many other colours that can be used or mixed.

My next challenge is to grip with Zenit AB on order and arriving in a months time.

Finally got to complete Alfie, top and bottom.

Added the stunning red 50° Paris 180cm trucks and big Orangatang Kegel wheels (with Bones Race Red bearings); although I am not sure of the wheels, they aesthetically dominate too much for my liking. I may replace with slightly smaller and darker wheels like the Hawg Mini Monsters on my Hackbrett.

The grip tape work is my own with a bit of help from some pre-cut shapes (the black pieces) which were meant for a Loaded Dervish. 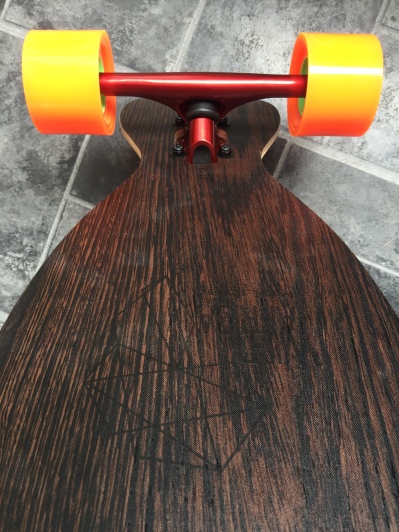 Now let’s see how Alfie rides; it will be nice to have some grip with the wet weather after the ‘too beautiful to grip’ Hackbrett.

Finally got around to putting grip-tape (first time I have put grip-tape on) on my Kaliber Wild Afric Affe, affectionbately now known as ‘Alfie”.

I had lots of ideas on fancy cut-out geometric patterns, including the map of the river Thames (I will do this some day), a big African tree, and a zebra; however, in the end, my alignment and cutting skills were the limiting factors and I ended up with a much simpler pattern. I found that although I could draw out patterns on the back of the grip-tape, the knives I had would snag too much and leave rough edges, especially on curves. Cutting from the top, the rough side, was much more effective in getting smooth lines, but difficult as you can not draw on it.

Thankfully I had ordered lots of grip-tape: 60″ for a 40″ board, so I could learn and throw away my bad attempts. In the end, I opted for a simple cover with just some curves cut in the end and then cover for the ends.

Covering and trimming the grip-tape is quite easy (a few videos demonstrate it well), if this was completely covering a skateboard, rather than trying to make intricate precise geometric patterns on a longboard, it would be easy and completed in a few minutes. Next time…